Your sales script is an effective aid when used professionally 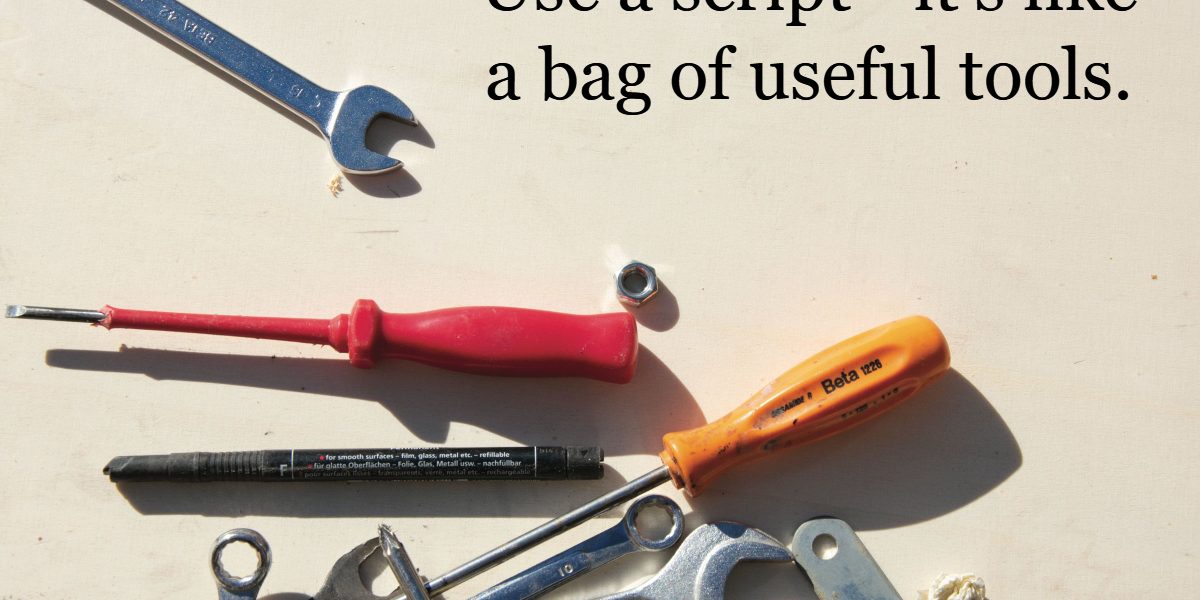 What do you think of the idea of scripts? I find the use of the word ‘script’  in relation to outbound telemarketing, telesales or lead generation is controversial. However, in my view, that is only because they’re used unprofessionally. The worst offenders are generally business to consumer (B2C) callers who phone you at home. They don’t take ‘No’ for an answer. They also don’t have any depth of knowledge or interest beyond what is written on their script. Does this sound familiar?

However, just leaving yours and my prejudices to one side for a moment…

The case for scripts

A successful sales call is almost certainly a call that is well planned and structured. How do you ensure this robust structure? By using a well constructed call guide or script. Benefits are that it helps you stay in control of your approach, and ensures you cover all the bases.

When we ran our outsourced telemarketing operation – Phone4You we tended to favour call guides, rather than scripts, but what is the difference?

Scripts are more specific. They set down what is to be said – word for word. Within some heavily regulated industries for instance, scripts are a legal, compliance ‘must.’ Supported by call recording, they give an accurate version of what was said. This is therefore an advantage, but it is also a disadvantage. Actors, TV presenters and stand-up comedians may be great at rehearsing and delivering a pre-determined set of words, but they practice, practice, practice! Or they have a photographic memory. Either way the script has to be delivered so that it doesn’t sound like they are reading. Particularly when selling, it is important that you retain credibility. Of course, as soon as a salesperson sounds like they’re reading someone else’s words, their credibility is gone.

Another pitfall is that often scripts use written language which is more formal, when they will be delivered using verbal communication, which is much more informal.

And whatever you do, don’t let the script be a long series of benefit statements about how good your company and it’s products are. You will bore the other person. They’re unlikely to buy from you, if you’ve bored them will they?

Remember that you’re trying to get them involved in a 2 way conversation as quickly as possible. It will feel more natural to both of you. We cover this on our Directing the conversation module during training.

By contrast you could use a call guide instead. These are merely an outline of what to say. Being ‘guided’ means you should have a good strong opening and close whilst ensuring you cover all the bases on the call. However the words used are largely the callers own. So it allows for a little more personality and licence in how best to communicate the message. For most outbound types of calling ; lead generation, telesales and telemarketing this is preferable to scripts.

Call guides allow members of a telephone team to think for themselves and encourage some imagination – whilst still ensuring that the call is conducted in a way which optimises the chances of uncovering sales opportunities.

What they need to be based around

If you’re preparing your own call guide to use to market your own business, or you’re writing it for someone else,  make sure you give consideration to the following key elements ;

– Objection handling. You will inevitably come up against objections. Be prepared for them. You probably know most of them already.

– Benefit statements. These are important to make your call sound interesting and not a load of blah-blah. Some key facts about other people you’ve supplied to, or real life cost savings some people get from your product, awards, new products etc. Make sure you’re considering it from THEIR perspective. What’s in it for them?

– Good strong corporate introduction. What I mean by this, is consider your opening lines. They are really important to get your call off to a good start. It doesn’t matter how good your content is if your prospective client switches off within the first few seconds is it?

– Call wrap-up is important to ensure your call finishes professionally. This should include agreeing a next action. Even if that might be a call back in 18 months time. Get permission, even if it is to call them again in a year. It’s such a light commitment on their part that they will inevitably agree. But at least next time you know why you’re calling.

What to do next

To Market works with companies, organisations and individuals to hone your approach so that you can make more sales on more calls to more customers. We work with companies around the East and West Midlands including Leicester, Northampton, Market Harborough, Oadby, Nottingham, Derby, Milton Keynes, Rugby, Lutterworth, Oakham, Uppingham, Loughborough, Coalville, Bedford, Wellingborough, Corby, Kettering as well as wider parts of Leicestershire and Northamptonshire. Contact us here if you want to develop more effective scrips and call guides for effective telemarketing or telesales.